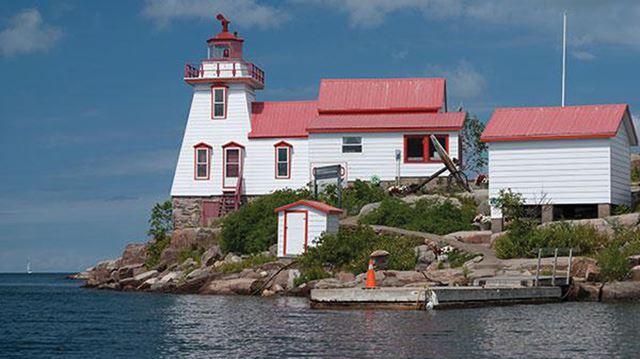 Please take the time to read the history of the lighthouse below and to watch the documentary about Emmaline Madigan and her many years of living and working at the Lighthouse.

The Township of The Archipelago leases the Pointe au Baril Lighthouse from the Ministry of Fisheries and Oceans.  The site has a panoramic view of the channel and is accessible by boat only.  It is a popular stop for residents and visitors who come to view the historical photos and artifacts of the region or to take a guided tour.  There is a small gift shop selling baking, t-shirts and hats.

The site of the Pointe au Baril Lighthouse is rich in history, dating back to the fur traders of the late 19thcentury who left behind an empty whiskey barrel that later came to be used as a marker by fishermen to guide them safely into harbour.  In 1889, the government replaced the historic lantern-topped barrel with the present-day Pointe au Baril Lighthouse.  The tradition of the barrel continues however, with one being located a short distance from the lighthouse.

Lighthousefriends.com provides a detailed history of the Lighthouse.

In the 1870s, fur traders from Penetanguishene lost a canoe along the eastern shore of Georgian Bay, and it was discovered the following spring by stranded fur traders, who helped themselves to a barrel of whiskey found in the canoe. After some whiskey-fueled merrymaking, the traders left the empty barrel on the point as a marker, and soon thereafter French mariners started to refer to the place as Pointe au Baril, meaning "Barrel Point.

The usefulness of the barrel was later improved, when a tradition started wherein the first returning fisherman would light a lamp in the barrel to guide the rest of the fleet back to safe harbour.  A portion of the barrel was removed and the lamp placed inside so that its light was only visible when the fishermen were approaching along a safe course.
Read more ….

Emmaline was 17 when she started her life at the Pointe au Baril Lighthouse. She married the lighthouse keeper and raised six kids there. After her husband’s death in 1977, she took over his duties and became the new lighthouse keeper.  After living at the lighthouse for 29 years, she was forced to leave her post in the fall of 1983 when the Canadian Coast Guard automated the light and boarded up the house.

In 2000, the Pointe au Baril Islanders Association and the Township of The Archipelago asked Emmaline and her partner, Bill Pugsley, to return to the lighthouse, to live and work during the summer months as local historians and museum curator.  Emmaline was thrilled to accept, saying that she never thought she’d ever be given the opportunity to be "home again”.  Emmaline continues to move to the lighthouse each summer, sharing her tales of lighthouse life with visitors and taking them on guided tours of the historic building.

Emmaline’s history has been documented by the Ojibway Historical Preservation Society:

Contrary to the popular image of the lonely lighthouse keeper, theirs was a happy life. The anchor that still sits out at the lighthouse is one that two of her young children spotted, looking down into the clear water from their boat on one of the many family fishing expeditions that the Madigans made to the Black Bill shoals in the open.

In 2012, Coty Forth’s short documentary, Emmaline (Lighthouse) was selected as the winner of TVO’s Doc Studio Contest. You can view the documentary here.