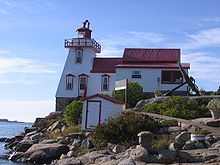 The original government bill had called for one municipality with more or less exactly the present boundaries of Township of The Archipelago, but this proposal was changed by the Legislature to create two townships, with a provision for their later amalgamation, at the request of the elected Councils.  The first elections were held in November of 1979 and on January 5, 1980; the Council of the Township of Georgian Bay South Archipelago and the Council of the Township of Georgian Bay North Archipelago each passed identical by-laws calling for the amalgamation of the two municipalities.

Before that time, the area now covered by the Township of The Archipelago was entirely composed of geographic townships, with no prior history of local government activity other than the work done by several Local Roads Boards.

The Townships of Cowper and Conger (except the easternmost part near Highway #69) were the basis for the south municipality – now the south area of the Township.  This takes in the islands and shoreline of Georgian Bay southwest of Parry Sound, from Twelve Mile Bay (at the Muskoka District Boundary) to Parry Island and up the South Channel almost to Parry Sound, and includes the principal inland lakes of the region, i.e. Blackstone, Crane, Healey, and Kapikog Lakes.  Almost a third of the population of the south section of the Township lives on the islands in the Sans Souci and Copperhead area, centred around Frying Pan Island.

What is now the north area – north of Parry Sound beyond Carling Township – was composed of the Village of Pointe au Baril on the mainland, together with most of the Townships of Shawanaga and Harrison.  This covers the islands and shoreline of Georgian Bay from the Twin Sisters (at the northern boundary of Carling Township) north to Charles Inlet and the Naiscoot River, a few miles south of Britt.

The distance from the south end of the south area to the north end of the north area is approximately 60 miles and the two are separated by Carling Township, whose southern boundary touches Parry Island in front of Parry Sound.

Boundaries of municipalities on the shore extend out to the centre of Georgian Bay and The Archipelago Township therefore, includes a substantial part of the famous Thirty Thousand Islands.  Indeed, providing for proper planning in the islands and waterways of the area was the original reason for its creation.

In a number of ways, the Township of The Archipelago represents a departure from traditional forms of local government in Ontario, but its establishment has provided an opportunity for many people who have a long connection with the area to make a constructive contribution to its development.